From the Cavemen to Culinary Arts

In the beginning there was wood, dry leaves and eventually, fire. Early man soon learne 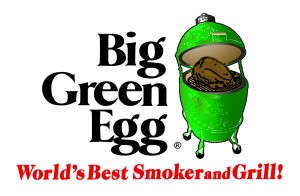 d the flavor benefits of cooking meat over this exciting discovery, which was quickly adopted as far superior to gnawing on raw Tyrannosaurus!  Eventually, smoked brie and s’mores were added to their culinary repertoire!

Later cultures discovered that the results were even better when the fire and food were contained inside a dome-shaped, earthen vessel. Evidence of these early prototypes of the Big Green Egg® have been found by archeologists in the ruins of nearly every civilization around the world, except the Propanians, who preferred to scorch their meals using volcanic gasses, and the DriveThruians, who ate all their meals from take-out and quickly vanished from planet earth.

The Big Green Egg is a modern-day evolution of these ancient cookers. Its design is modeled on the clay cooking vessels first seen during the Chinese Qin Dynasty and then used by the Japanese beginning in the 3rd century. Ironically, from the origins of the domed cooker back in the Qin Dynasty, today there are many fake “EGGs” and inferior copy-cat kamado style cookers coming into the United States from China!

Centuries ago, these knee-high cookers were fired by wood or natural charcoal (just like the Big Green Egg is today), and pots were hung inside them for cooking rice. Eventually a slatted cooking grid was fitted inside for grilling and roasting meats, and by the 1600’s they were raised off the floor and placed on a platform–a position which undoubtedly was much easier on the cook’s back!

Popularity began to spread as U.S. servicemen discovered this style of cooking during World War II and shipped them home after the war. The domed cookers were an exciting alternative to the metal charcoal or gas grills of the day, and people were sold on the added flavor and juiciness the “new” cooker gave to foods. 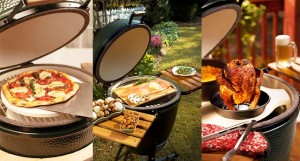 American serviceman and entrepreneur Ed Fisher was one of those guys who discovered the domed clay cooker while overseas. He was amazed at how much better food cooked by this method tasted, and he began to import them for his friends and associates. When Ed Fisher first opened the Big Green Egg store in Atlanta in 1974, he sold a simple cooking device made of fired-clay, which was based on the same design and materials that had been used for thousands of years. Despite the great results they produced, these original cookers became fragile after a few years of use and exposure to the elements.

So, having now become committed to developing a company to produce and market these amazing cookers, Ed set out to make the best one ever created.

His efforts gained notice as he refined the composition of the ceramics and aligned the Big Green Egg Company with a state-of-the-art factory to manufacture his products in the hands of skilled ceramic artisans. Company engineers incorporated new types of ceramics, based on materials initially developed by NASA for the space program, and worked tirelessly to find ways to improve the design, often in small, incremental steps. The result was a far superior cooker that is stronger, more durable and provides better heat insulation than anything else on the market, a distinction the Big Green Egg holds today.

As the Big Green Egg has evolved over recent years, significant changes have been made to keep it miles ahead of other “kamado” cookers. State-of-the-art ceramics, a patented draft door, and a dual-function metal top now permit a wide range of easily adjusted cooking temperatures from ultra high-heat searing to low-and-slow smoking. A permanent porcelain glaze ensures the signature green color will not fade or discolor under any outdoor conditions.

Other improvements have enhanced the traditional design including a spring-assisted hinge system and a heavy stainless steel cooking grid. And a team of R&D specialists keeps looking for ways to make the Big Green Egg even better! EGGzilla, which started out as a prototype of massive proportion, led to the newest XXL EGG, which will finally enable users to grill that brontosaurus their ancestors could only dream of!

The Biggest and the Best

Big Green Egg is now the world’s largest producer and international distributor of the highest-quality ceramic cooking system. When you purchase an EGG, you know your investment is protected by a successful, experienced company with a worldwide reputation for best-in-class products and unmatched customer service – providing you with the confidence that comes from knowing that this company has been standing behind their products for over three decades!

From Ed’s original Big Green Egg, the company has grown to include seven sizes of the EGG, and hundreds of accessories and related products designed to make cooking just about anything on a Big Green Egg fun and entertaining.

If it doesn’t say BIG GREEN EGG, it isn’t …. or, as Ed Fisher likes to say, “A Big Green Egg may be a kamado style cooker, but every kamado cooker is certainly nothing close to a Big Green Egg!”